Ok, so we all know the sound of the cb radio, and while outsiders here shit like, chicken coop, smoky bear, alligator on the line, city kitty with a customer; most don’t really know what we are really saying….

Common Calls heard over the CB Radio, and what they actually mean: 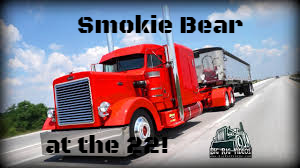 Smoky Bear- yep, just like US Forest fire prevention, Good ol’ Smokey…… Typically a driver would say, “Smokey Bear at the 27.”, Which means At the 27mile marker there is a State Trooper

“Smokey Bear with a customer” means State Trooper has someone pulled over and probably writing tickets.

City Kitty- local pd, associated with a town or city

An Alligator- or also known as a Gator- they are dangerous and they bite….The Gator is the treads of a blown out tire, typically; can be other debris, but mostly a recap that has blown while going down the road.  They are dangerous, and do cause some crazy shit to happen, so yes, they do bite.

Chicken Truck- yes, it is an actual thing. A chicken truck is a truckers way of describing a truck that has a lot of lights, on their truck and trailer set-up.

Petermobilin’- Driver of a Peterbuilt, in reference to his driving of the Peterbuilt.  Typically, amongst most, it’s a style, a way of driving, that is noticable among the Petermobilin’ crowd.  Easy to spot, most noticable by the driver having his seat, positioned without any air, or just barely enough to keep him comfortable.  He would be barely seen, as passerbys are passed, in his high strung 18speed double over Petermobile, running 95 on 95.

Peter-mobile- term used in place of the manufacturer of semi trucks name Peterbuilt, or driving a Pete, as they can be referenced.

Lot lizard- this is a truck stop prostitute, that goes around knocking on doors and hollaring out for Business on the CB at the truck stop.

Chicken Coop- where all the hens go for safety at night…just saying……these are the scale houses or weigh Stations on the interstate, used to ensure truckers are following the rules of the DOT.

If the Coop is “Pounding the Pavement” they are out checking weights, books, and doing inspections as the drivers move through the facility.  They pick and choose, trying to find violations, for any reason to catch “unsafe operations for the public’s safety”…..

In reality, they are the Kitties for the Department of Transportation within their state.  They are the Police Officers of Trucking. Regulating for the Public Safety…..or so they say…. They do inspections, audits, ticketing, investigation, and authorizations/unlicensing of carriers.

Big Radio or High-stepper- amongst a few others, however these are the truckers with the powerful boosted cb radio.  They are known to talk 20/30/50 miles out, due to increasing the output amperage of the radio with a Linear.  They usually can talk over anyone trying to talk to others, I have also seen them completely block out any communication while they are keyed up close.

CB Handle, or Your Handle-  A name that a trucker is given from other truckers that has ran with the trucker.  I would say a right of passage.  Like a fighter pilot call sign- truckers are called by their handle over the radio for the remaining time of their career.  “No Name” is my handle;

Convoy- just like a military convoy, but it’s a line of trucks, moving freight, controlling their space of truckers from the cars.

Fifty cents- not the rapper- they are the Motorcycle Cops

Shooting at You- term is used in reference to a cop, of some level, shooting the radar, to measure speed of traffic that are and are not in violation of the Speed limit.  Typically stated as, “Got one at the 87, looking at you eastbound, shooting at you.” Basically, he is giving a heads up that there is an authority at the 87 mile marker, facing the east bound side, and using the radar to catch speeders.

Yard Stick- the mile marker system of the roadway.  Each mile that is posted is a yard stick.

Steering Wheel Holder-  Driver’s of Commercial vehicles that should not be driving; instead of actually driving, they are the steering wheel holder in the truck, and just hold the wheel, instead of Operating as an operator.

Skateboard- this is a flatbed trailer set-up

Parking lot- this is a car hauler set up

Reefer- is a refrigerated truck and trailer set-up

Dispatch- as far as truckers are concerned, they are the ever knowing team “leader”, decision maker for the truckers on their fleet.  Also called Fleet Managers.  Need to get home?!? better make nice with dispatch, cause they ALL are known to not get you home for a break, putting you half way across the country to keep just another truck out on the road extra time.

Knocker- the piece of wood that typically resembles a small wooden bat, used to check the tires on the tractor, and trailer ensuring proper inflation.  Also can be used in self defense, of such trucker, which is in control of it.  Typically stored beside the truckers driver seat in the cab,  between it and the driver side door.

Dog box-  the storage compartment on a semi, typically behind the doors of the cab.

Hotshot- a hotshot is typically a driver operating a dually or similar small truck, with a trailer, primarily doing short, light, expedited freight.  Known to run oilfield Materials in and out of the oilfields, to prevent a oil rig shutdown.

Know more?  Tell us the one’s that you know that are not listed,  comments are welcome, and encouraged.